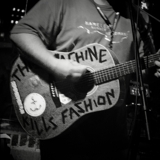 ACOUSTIC ROSS is a solo AntiFolk artist, recovering Fat Person & music nerd from Ohio. With a first name like "Acoustic," there are only so many professions available, and installing soundproofing just didn't sound like that much fun. ROSS's fiercely original take on life is a one-man assault on all things stale and boring. Equal parts folk, punk, rock, blues, country and pop, with a dash of standup comedy to taste - it's AntiFolk al dente, high-energy Service with a Smirk. Little is safe and nothing is sacred as ACOUSTIC ROSS – “a smart smart aleck,” according to the Tulsa World – skewers targets far & wide with a biting wit and a wild irreverence, and his trademark set-closing Medley... well, the Medley you just have to see to believe. ACOUSTIC ROSS might just prove that solo acoustic music doesn’t have to be boring, quiet or mellow. 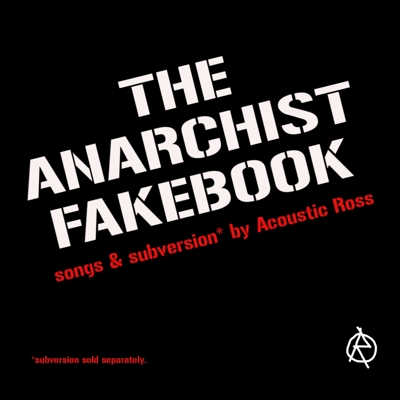 Liner Notes: all songs written by acoustic ross and © 2008 northcraft entertainment organization. all reasonable rights reserved reasonably. written, arranged, produced & performed by acoustic ross, with backing vocals by the lakshmi singhers and appearances by: greg klaus - stunt guitar on *blushes* jeff graham - stunt guitar on '#95', bass on *blushes* dylan field turner - drums & voice on track 21 (with greg & jeff & me) 'ruby' - an acoustic ross song written by math lab - thus features michael irion - guitar, jarrod oakes - bass, dennis pagano - drums recorded, mixed, overthought & overwrought by acoustic ross during a tumultuous april-june 2008 at tulsa's own northcraft studios, except the basic tracks on 'ruby' recorded at 4112 on nov. 12, 2005. much was done in full, long and even first takes, but the part where i just talk for 60 seconds? FOUR TAKES and about 12 edits. true story. these songs were written between 1970 and 2008. they may not always be referring to that to which you think they are referring. track 18 is © 2006 math lab. none of these companies have given me anything for telling you i used their equipment, but they're welcome to call with an offer: fostex mr-8, audix om-2, a sweet gibson sg, line 6 spider ii, vibraslap, (we all live in a) yellow tambourine, boondogs promotional tambourine, lotus bass, cheap drum kit, yamaha pss-560 & pss-170, dad's army harmonica, plastic shaker, l.r. baggs pickup, mega mite megaphone, slapstick, dod supra distortion, peavey 1604 mixer (best 7 bucks i spent last year), and the best damn acoustic A&L ever made, which somehow has tolerated nearly 15 years of violent string-breaking performances in the hands of an utter lunatic, enduring it all despite a near-total lack of professional maintenance. i did most of this myself, but i sure as hell didn't do it alone. thanks to chuck whittington, mark allender, gloria shade, math lab & all the guest stars for technical assistance, and by that i mean answering truthfully when i asked 'does this sound like shit?' further thanks to math lab (either my side project or my main one, depending on which day you ask) for four years of being awesome, except for that fat guy who stands in front and is a complete dick. screw that guy. thanks to michael irion for telling me i should write a song called '+3 sword of protection,' which naturally is dedicated to gary gygax. pictures by dennis pagano (lower left), nancy mendoza (lower right), & gloria shade (mohawk), other pics & graphic design by yours truly. i can't possibly overstate the contributions made by gloria shade during the 5 years leading up to this record existing. in fact, i can't possibly put them into words at all. 'eternal gratitude' only begins to cover it a little. thanks to everyone i've already listed in these notes; to debbie at thememstore for unreal customer service; to davit souders for stage name #2 ('witty guthrie'); tom green & d-fest; eric gomez & mayfest; kjrh; krsc; iRok radio; bart ford & under the mooch; joe cinocca; dusty; cathy logan, jennifer chancellor & the other awesome tulsa world / spot folks (spotniks r.i.p.); gary hizer & urban tulsa; jim munroe & nmk; kotv; cjr & full cup; ben garvey; lach, hamell, tom lehrer & adam brodsky for any ideas i accidentally stole; lacey lett; shawn brett; apocryphal mushrooms; llp; to all knarr-johnson-wagner-marxen-greenawalts; and to you, whoever you are wherever: now and forever, i'm your #1 fan, and only the nice songs are about you. please to visit and to enjoy www.acousticross.com