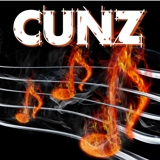 CUNZ - Welcome back to the 80s

Although they were doing a lot of studio work as well as some awesome live gigs, CUNZ never released a studio album of their own. Their members were too engaged with remittance work or guest appearances with bands like Delight, AJA and others. The rare material that is still available of CUNZ sounds a lot like Rick Springfield, Toto or Nightranger. If you like those you can't go wrong with CUNZ. It's 80s to the core with some very distinctive and promising vocals of lead singer Jan Lipfert.

CUNZ is one of those many rough diamonds back from the 80s that never made it to front-row. Some of their tapes were re-discovered and re-released in 2013 on the album ROUGH DIAMONDS that includes the song Nightheart's Nightclub - a splendid, price-winning live performance at Music Hall, Frankfurt in the late 80s.

CUNZ will give you a lot of pleasure while listening to their material and remembering the prime time of rock music. Well, just keep on rockin' !

CUNZ - Welcome back to the 80s