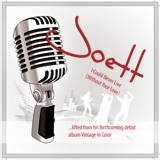 Tanzanian vocal coach Joett, a former pop sensation whose debut single “Afro Lover” -– produced by multimillion selling British record producer Tambi Fernando -– peaked at number six in the UK dance charts in 1996; and featured in a multitude of club playlists and dance compilation albums across the UK, Europe and the Middle East, is back with a brand new single “I Could Never Live (Without Your Love)” on worldwide digital release December 20th 2010 via Island Def Jam Digital Distribution. Originally recorded with accompanying acoustic guitar in Dar es salaam, Tanzania; with additional production, mixing, mastering and remixing in London, UK, this single has a total of six tracks. The Radio Edit, Remix, Original Acoustic Version and three Instrumentals.

Joett, a resident of Dar es salaam and an accomplished vocal coach who was trained by one of the UKs top vocal coaches Sybil Esmore – a protégé of legendary opera singer Luicano Pavarotti – spends most of his time teaching his growing list of students how to sing. He says, “I am delighted to be back making music, and especially to be teaching people how to sing!” With his debut album Vintage In Color on the way in 2011, and a voice training CD he has been working on for several months, he plans to continue making music, performing and writing articles with handy tips on the art of singing like a pro.