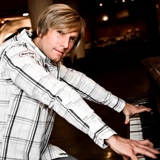 After spending more than a decade playing rock and roll/country in piano bars through out the midwest, Michael began to feel as if he had missed his true calling. "Is this really all that I am meant to do?" Michael asked. While he was gone on the road, Michael felt the urge to write a song for his wife. Michael wouldn't realize it then but God's love, grace and faithfulness was starting something new.

Since recording "Your Pretty Face" Michael felt encouraged to start writing more, performing his songs live which have a modern country/rock feel . He started attending Metro Community Church in Edwardsville, IL received Christ, made strong friendships and quickly realized what God had called him to do. A ministry of writing and performing songs about faith, family and to deliver a positive message through songs to help families and individuals grow closer to God.

Michael is a member of the Praise and Worship team at Metro Community Church and still plays sings and plays piano at The Big Bang St. Louis, weddings and many fundraisers. Whether it is playing music at church, events, venues, Michael pours his heart and soul into his singing and playing. God never stops, God doesn't go through the motions. We shouldn't either.